It is with profound sadness that we, the family of George Edward Kirton, announce his passing on Thursday, March 18, 2021 at the Misericordia Hospital, Edmonton, AB. As per Georges wishes, cremation has already taken place during a private gathering at Pointe West Cremation & Funeral Service Ltd. in Edmonton.

Born on May 25, 1965 in Sydney, George was the first born and only son of Cindy (Doublette/Maxwell) Cambridge who raised George and his sister, Melinda on her own as a single parent. George’s birth father was the late Eleazor Edward Kirton. George shared a father/son relationship with his stepfather, the late Joseph Prince Cambridge. George is lovingly remembered by his mother, Cindy; wife, soulmate and best friend, Faye Mitchell and her whole family who joyfully embraced him. His relationship with her adult children and grandchildren was one shared with laughter and mutual love. George also leaves behind from previous marriages, three children, Richard, who resides in Nova Scotia; Amanda and Ryan, both of Ontario, and his two granddaughters, Amelia and Elizabeth, also of Ontario. Also left to mourn are his sister, Melinda of Sydney; niece, Tanisha of Edmonton; nephew, Chris of Ottawa and Suzie Q, also of Edmonton, all with whom he shared a special bond. George is also survived by his extended family, sisters, Charlotte and Crystal, both of Alberta; many aunts, uncles, nieces, nephews and cousins; as well as several stepsiblings and godfather, Whitfield Best Sr. of Sydney.

Besides his father and stepfather, George was preceded by his grandparents, Annabell (Gero) and Harold Kirton of Sydney; Margaret (Maxwell) and George Morrison of Whycocomagh; as well as several aunts, uncles and cousins.

George was a graduate of Sydney Academy, in Nova Scotia and worked several part-time jobs in and around Sydney before joining the Militia in 1982 where he worked as a military police officer, which ultimately led him to join the Canadian Armed Forces in 1984. George completed basic training in Cornwallis, Nova Scotia, and never looked back. This would be the beginning of a commendable 21-year military career as a Heavy Equipment Operator and Airborne Engineer with the 2nd Canadian Engineer Regiment. George saw several postings but was mostly attached to CFB Petawawa, Ontario. George served his country proudly and saw several deployments including Alert, Kuwait and Bosnia. Some of his proudest moments in his career were accomplishments achieved while in the military, particularly his commendation awarded by the Chief of Defense Staff following his tour in Bosnia. George achieved the rank of Sergeant before his medical release in 2003. (http://weblink.donorperfect.com/SgtKirton) 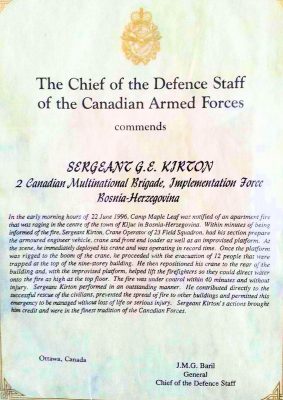 Upon release, George studied Business at the University of New Brunswick, and received certification in Landscape Design from the Community College in Woodstock, New Brunswick. Following certification, he established and operated his own landscaping company, Final Touch Landscaping & Design. George later went on to achieve his journeyman certification in the occupation of mobile crane operator-hydraulics and secured employment with Voice Construction Limited, North American Construction and later began his civilian career with the International Union of Operating Engineers Local 955, where he worked passionately as an instructor in the areas of Heavy Equipment and Crane Operations. George achieved his Master Instructor, Level 1 certification from Northern Alberta Institute of Technology. A member of the St. Philip’s African Orthodox Church, in Sydney where he was ordained in 2009.

George was extremely passionate about the game of golf and was proud to put his experience in landscape and design to work in the development of the beautiful Lakes at Ben Eoin. George also enjoyed watching hockey and football and would often show his support to his local Edmonton teams but his adoration for Tom Brady and his New England Patriots was hard to watch to say the least. George had such a comedic personality and loved to make people laugh, so it was only fitting that in retirement he would enroll in comedy workshops and even debut in a comedy club open mike, naturally leaving everyone in stitches. George had such an infectious smile that touched so many, he will always be remembered as a positive, loving and selfless person.

In lieu of flowers, George asked that his family and friends donate in his memory to the National Scholarship Program through Support Our Troops Organization.

Visitation and memorial service to celebrate the life of George Kirton will be held at Pier Community Funeral Home, 1092 Victoria Rd. (entrance on Church St.) Whitney Pier on Saturday, April 10, 2021. A gathering of family and friends will take place from 1 to 3 p.m. with the memorial service to follow at 3 p.m. in the All Faith Chapel with Reverend Mother Phyllis Marsh officiating. Interment will take place in All Faith Gardens, Whitney Pier. ‘Covid Protocols’ will be in place during the service and for those not able to attend, ‘Live Streaming’ will be available at https://www.facebook.com/35925689617/live/

Funeral arrangements are entrusted to the care and direction of Pier Community Funeral Home.

So sorrry to hear of George’s passing. His days spent in Whycocomagh, over the years, made so many good memories, for so many people. He created so many smiles and many tears of laughter. He will never be forgotten. My very sincere sympathy to his mom, sister and his entire family. Thinking of you all and sending prayers and love. Rest in peace, my friend!
From:  Fred Matthews

I met George when he joined the Militia, I was instantly taken by his humour, and his smile, he was such a nice person, here it is 39 years later, I often thought about him, God Bless you’re Family, and Thank you for your service George, R.I.P buddy.
From:  John Jessome (Sgt. Ret.)

Cindy, Melinda and family. My thoughts and prayers are with you at this time.
From:  Phyllis MacMullin

My sincere condolences to the family. My thoughts and prayers are with you all at this difficult time. God Bless.
From:  Stella Walcott

Cindy and Melinda, I’m so very sorry for your loss. George will be missed. Thinking of you all and your family. RIP George.
From:  Sandra and Larry Hrynick

We the family of John & Ingrid (Maxwell) Shannon would like to express our heartfelt sympathy to Cindy & Melinda in the loss of their loved one. I always enjoyed our time in George’s company never a moment without laughter. Our cousin will be remembered fondly. Our Thoughts and Prayers are with you all at this very difficult time. RIP George
From:  Ingrid Shannon

My deepest deepest condolences to all the family. Cindy and Melidna my heart goes out to you both. George was a real great guy with the most affectionate smile only he could share if you were fortunate to know him. God bless you all he will be very deeply missed but never forgotten.
From:  Philip Borden

My sincerest condolences to George’s family and close friends. I went to junior high with George, and he was the sweetest guy with a larger than life personality, always happy and smiling. It sounds like he carried this throughout his life. God bless
From:  BettyAnne MacPhee (MacNeil)

My sincere condolences to Cindy and Melinda in your time of sorrow. George was a wonderful man and will be deeply missed by all who knew him. Prayers and hugs Fly high with the angels. Rest easy
From:  Cyndi Dithurbide

My thoughts and prayers are with you and family
From:  Wanda Kirton

Cindy, Melinda, Faye and families; my condolences on George’s passing, this sweet man has been thru alot and now he is at rest. I will always think of George with his beautiful smile and friendly manner, he could lift your spirit by chatting with him and that is a gift. Glad for having known George and saddened to hear he has passed. My prayers are with his family.
From:  Pat Jacobs

So sorry to hear of George’s passing, our condolences to Melinda and all the family.
From:  Ecky & Lesley Corbett

I have many wonderful & funny memories of George when he would come to Blair’s in Whycocomagh when we were teenagers! He always kept you laughing & he always had that great smile & devilish look in his eyes & a huge heart! A bright light has left this world! I would like to send my Deepest Sympathy to his Mom, wife & all his family! Rest In Peace George
From:  Cathy (MacKinnon) MacInnis